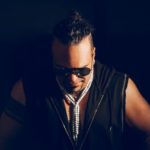 After initially releasing the “Rain Drops” instrumental in June of 2020, on March 12, Israeli producer ANTDUAN will debut a vocal version of the single featuring Romanian vocalist Alexandra Badoi, along with an accompanying visual. The upcoming single can be pre-saved here.

“I used to love those tunes from the early 2000’s trance scene and I feel that my song is in the same vibe as those old songs, but with modern instruments. For me, having emotions and soul in my music is the most important thing and I am always trying to add them. I produced the instrumental version of ‘Rain Drops’ in the first lockdown time and it was one of my first tracks that had a really good reaction. Afterward, I was looking for a vocalist similar to the songs of Tiësto and Paul Oakenfold from early 2000, and I found Alexandra. She had the perfect voice and it comes out exactly the way that I imagined it would.”

Badoi is best known for her feature on Armin van Buuren‘s “Cosmos,” released under his Rising Star alias. Through a mist of trance plucks and brooding ambiance, Badoi’s voice creates a serene harmony that leads into a field of brooding brass, trance melodies, and deep house allure.

Get a preview of the “Rain Drops” visual below, ahead of its March 12 due date.