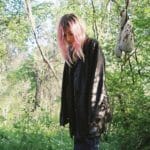 fknsyd has filed her self-produced debut EP Moontower, a project that the Floridian singer-songwriter describes as both a “safe place and tiny escape,” via SLANDER‘s Heaven Sent. The three-track undertaking positions fknsyd’s hypnotic vocals atop downtempo experimental beats that simultaneously evoke bittersweet and ambivalent moods.

Now based in Austin, Texas, fknsyd has stepped further into the spotlight in recent years, notably collaborating with some of dance music’s most innovative such as WAVEDASH, Kompany, Shadient, Ray Volpe, and more. Moontower offers a glimpse of what fans can expect in the future, but for now, listeners can revel in fknsyd’s self-reflective songwriting on this massive creative benchmark, through which she invites listeners into her world as a way to heal and share happiness.