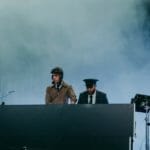 Following the announcement of a collection of November shows at Banc of California stadium alongside RÜFÜS DU SOL, Flight Facilities are back with “Lights Up” via Future Classic and Glassnote Records. The Aussie pair join with Compton-raised Channel Tres for a single that intermingles old-school West Coast hip-hop and ’90s Detroit-style house. Following Tres’ blockbuster year, which included an EP as well as singles alongside SG Lewis, Tyler, The Creator, and VanJess, the track drips with a swagger that seems to follow the hip-hop up-and-comer wherever he goes.

Flight Facilities said of “Lights Up,”

We’ve always loved the sound of the early Detroit house scene that crossed over with the paradise garage era. Combined with our love for Channel’s voice, it seemed like a perfect fit.

Since gaining traction with their 2014 classic “Crave You,” Flight Facilities have consistently churned out deep cuts and can be found in Los Angeles from November 12 – 14 for their first returning show with RÜFÜS DU SOL. In the meantime, “Lights Up” can be streamed below.