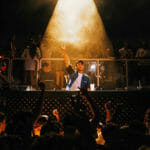 Florian Picasso remains the sole STMPD RCRDS signee with enough firepower as of late to spawn a GRX release from Martin Garrix. After the two reconvened for an awaited “Make Up Your Mind” successor in April of 2020—the first time Garrix went under that abbreviated name in two years—the STMPD RCRDS dyad has reconvened to consummate a collaborative trilogy, with Picasso tapping the label head for assistance on the introductory number of his impending EP, Héritage.

Picasso—who goes by his birth name for the uninformed—decided to craft an aptly named project that honorably pays homage to his late great grandfather through an “exciting piece of music and images.” Just a few seconds into “Far Away” and Picasso is already doing just that, with he and Garrix deciding to turn a stylistic 180 from their previous two meetings, opting for a much more euphoric, lighthearted spirit relative to “Make Up Your Mind” and “Restart Your Heart.” Although Garrix purposed GRX for releases he feels he doesn’t have an equal degree of production involvement in, his contribution to the first Héritage cut is more than palpable, with Picasso directing the violin-drenched single towards the dateless progressive and electro house heart of the previous decade, evoking a nostalgic resemblance to that of Porter Robinson’s “Language.”

Watch the cinematic video—directed and written by Loïc Schütz—for “Far Away” below.