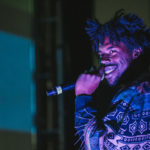 On the heels of MF DOOM‘s death, Flying Lotus has taken to Twitter to confirm that an EP was in the works between him and the late rapper. The music industry has continued to reel from the news of MF DOOM’s passing after the rapper’s family confirmed on December 31, 2020 that the artist had passed away two months prior on October 31.

One of many artists who paid homage to the hip-hop icon, Flying Lotus tweeted out,

“God fucking damnit. What the fuck!!?!? Are u serious? My soul is crushed. The weight of this moment. I know we are in a pandemic but we have to celebrate DOOM. Just playing the music isn’t good enough.”

In response to a fan who posted that many had dreamed of a long-length project between him and DOOM, Flying Lotus validated there was indeed an EP in progress.

Just weeks prior, a collaboration between Flying Lotus and MF DOOM, “Lunch Break,” was released as part of the latest update to Grand Theft Auto Online. Although music from the unreleased EP has yet to be seen, fans can hope that it will see the light of day as an homage to the legendary rapper’s passing.