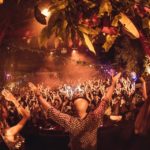 With two decades of history and accompanying influence on the techno scene, Sven Väth‘s Cocoon Recordings celebrates a well-deserved anniversary with the unveiling of 20 Years: Cocoon Recordings. Having hosted the likes of Loco Dice, Adam Beyer, Richard Villalobos, Guy J, and more, the iconic German label now showcases the artists and the sounds that have brought Cocoon Recordings to its current status as one of the genre’s most longstanding operational forces.

Stretching across an exclusive 15-track selection, the 20 year compilation reaps contributions from Solomun, Tiga, Rampa, Pig&Dan, Gregor Tresher, and several more, all of whom bring potent slices of the techno stratosphere in their appearances. The assortment journeys through pounding drums, jittery synthwork, wobbly sound design, and glitched landscapes—diving into the acidic, the astral, and melodic planes. From the uncanny machinations evident in Tiga and Roman Flügel‘s “Look To The Sky,” to the emotive intuitions behind Petar Dundov‘s “Overtone,” ravey textures in Rampa’s “2000,” and organic sonics in Richard Tobar’s “El Eterna,” 20 Years: Cocoon Recordings represents a consolidated spectrum of techno in its most beloved forms through the context of Väth’s imprint. On the milestone occasion, Väth spoke to Dancing Astronaut:

“Wow, 20 years have passed by. Such a long time and we have continuously honoured the work of an enormous variety of talents. First of all, I want to thank every single artist for being a part of this great musical journey. 20 years ago, I founded the label with the intention to release interesting music from new challenging artists.

Over the years, we have released a wide range of electronic music. From techno and house all the way to electronica and ambient. It makes me happy and proud that we have provided a platform for limitless creativity and we are not stopping!

Our commitment has always been to release the somewhat ‘crazy’ tracks and push the boundaries. Sometimes it needs a little courage to release such tracks, but so often it was these tracks that became the label highlights or even Cocoon Classics. We always look at our publications holistically, so the unity of music and design is really important.

This compilation took almost a year to put together, but we had so much fun working on it. We are proud to be a vinyl label and even after so many years, nothing will change about that. Please join us in celebrating!”