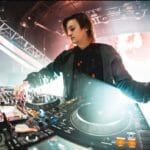 Ghastly has officially dispatched “Blackout,” a hard-hitting single that arrives ahead of the DJ’s forthcoming EP. The hypnotic dubstep cut drops on the heels of “The OG,” debuted during Ghastly’s Ubbi Dubbi Festival stint just after its release on April 20. After a successful string of shows in 2021, Ghastly seeks to maintain his momentum by reasserting his mainstage appeal. “Blackout” does just that, encapsulating the true essence of dubstep with heavy-hitting percussion and mesmerizing sample cuts.

Insomniac touts Ghastly as “politely abominable and casually destructive.” The Arizona-born producer will be sure to affirm his approachable yet domineering production style on his upcoming EP, to be released by Kannibalen Records.