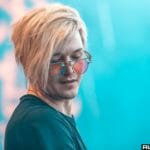 Ghastly threads a cohesive theme through the tracklist of his new EP, The OG. Distributed by Kannibalen Records, The OG marks the Prodigy signee’s first multi-track project since his independently-released 2018 record, The Mystifying Oracle. Ultimately, the Arizona-native’s latest is a product of the pandemic and a tribute to his deceased pet lizard. Says Ghastly,

“I wrote ‘The OG’ in the middle of the pandemic as a return to having fun and being carefree again and also as an ode to my pet chameleon that had passed away because I wrote it while he was hanging out on my head and he truly was an OG.”

The bass-heavy EP doubled in size on its June 16 release date, adding “Octopussy” and “Creep It Real” into the mix. Ghastly first dispatched the title track, “THE OG,” on April 20, just ahead of his festival comeback set at Ubbi Dubbi. Since then, the low-end talent has been locking in a bevy of gigs, having just returned from headlining a sold out show in Las Vegas.

Quite the lizard tribute—stream The OG in full below.

The post Ghastly’s ‘The OG’ EP is a quartet of hardstyle gems appeared first on Dancing Astronaut.