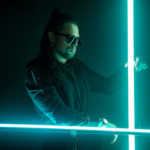 After converging their talents on four respective one-offs in 2020 alone, the Italian-Haitian shot caller and Lylez are now showing that the serial nature of their collaborative history won’t be confined to the past year, and that’s very good news for listeners, to say the least. Blu’s opening number of the new calendar year, “Fall in Love with the Music” arrives hot on the heels of “Forever,” which provided the finale to his 2020 run. Not coincidentally, “Forever”—a future house rinse of Chris Brown‘s 2008 fan-favorite—also awarded vocal credits to Lylez.

Lylez’s vocal versatility has been unquestionably clear on past Blu releases, and his dynamism holds on “Fall in Love with the Music.” The single taps into a sultry, ZHU-reminiscent style of underground house that, despite its crepuscular tone, finds some of Blu’s signature buoyancy in its future house hook. Blu’s studio is blissfully open again for business in a year that holds the promise of it being his best yet—to no one’s surprise.

The post Gianni Blu and D. Lylez hit an underground house bullseye on ‘Fall in Love with the Music’ appeared first on Dancing Astronaut.