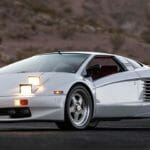 Giorgio Moroder is selling his Cizeta-Moroder V16T prototype on RM Sotheby’s, with the vehicle expected to sell for as much as $9 million USD. The Father of Disco had teamed up with Claudio Zampolli to act as an investor in this car, which had been designed by Marcelo Gandini. Nine models of the car were created alongside the prototype currently for sale, which had been displayed at the 1989 Los Angeles and Geneva Motor Shows.

In 2018, Canepa Design had done a full mechanical restoration of the vehicle. Complete with a red interior and four pop-up headlamps, the stunning design will be sure to go in only a matter of time.