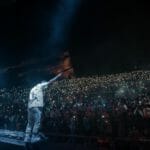 It couldn’t have been written any better for Blanke’s first show as a Denver resident to be at Red Rocks. In between a banner calendar that’s seen him shut down EDC Las Vegas’ circuitGROUNDS, mint his new ÆON:MODE project on Deadbeats, and become an Ophelia Records regular, Blanke was deservedly called in by ILLENIUM to join the billing for the Fallen Embers mastermind’s second of three stints at the iconic Colorado amphitheater. Earlier this November, Blanke announced that he’d collected every available stream of his dating back to 2018, with him now choosing to tack on another career highlight to that list with an upload of his hour at Red Rocks.

“One of the most surreal moments of [Blanke’s] life” was a more than apt way to put the October 8 evening. Exactly two years prior, Blanke joined ILLENIUM for one of three Ascend tour stops at Red Rocks so it was only right they ran it back at the next possible chance. Blanke leaves no stone unturned throughout all 60 minutes, rolling through unreleased pairings with the likes of Dancing Astronaut Supernova RUNN, Zeds Dead, and Kayzo, his EDC Las Vegas compilation cut “Blackout,” “Breathe,” and “Survive” with Luma before ultimately capping off with an all-time Dancing Astronaut favorite, “One More Day” with Jason Ross and Chandler Leighton.