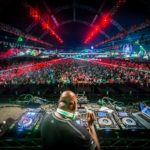 Though New Year’s Eve 2020 is in the rearview, the party continues with playback of Carl Cox‘s flourishing set from Melbourne, Australia as part of Beatport x Absolut‘s virtual New Year’s Eve event, #DanceAway2020. The livestream, which broadcast for more than 20 consecutive hours around the globe, was followed by Cox’s four-hour “oh yes, oh yes!”-inducing performance for the Ibiza Food Bank benefit event.

Carl Cox sets have hardly been in short supply, but his #DanceAway2020 stint is an uncontested crown jewel of his recent live stints. Find the full hour-long performance below.