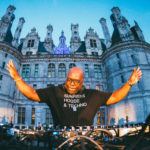 A celebration of some of dance music’s most influential Black artists and other producers of color wouldn’t be complete without some Carl Cox, and Dancing Astronaut is voyaging back accordingly to 2018 for the king of techno’s Cercle set, live from the beautiful Château de Chambord.

The rare concert experience embraces a two-hour “oh yes, oh yes!”-inducing set from one of electronic’s all-time greats, with Cox’s surreal mixing abilities assuming control of one of France’s most recognizable chateaus. Truly a DJ who does not fake the funk and has just as much fun as his crowd, Cox bestowed a proper performance while the Cercle produced a magical backdrop at the foot of the castle in the Loire Valley.

Listen back to Carl Cox’s 2018 Château de Chambord DJ performance in France below.