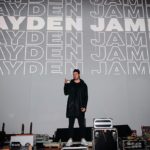 Over the past two months, the second season of Foreign Family Collective‘s “Intermission Broadcast” serial has become the main attraction on the electronic mix end, what with ford. and Tycho stepping up to submit installments “009” and “010” in November and December, respectively. The idiom “good things come in threes” comes to mind as ODESZA‘s label commissions mix “011” from Hayden James, who opens his “Intermission Broadcast” stint with a statement: his unreleased remix of BRONSON‘s “DAWN.”

Shuffling through an assortment of originals from a varied cast that includes Honey Dijon, Chris Lake and Armand van Helden, and even one of Dancing Astronaut‘s Artists to Watch in 2021, John Summit, among others, James executes his “Intermission” stint with curative diversity and verve. Next up on the “Intermission Broadcast” roster are BRONSON, whom Foreign Family recently confirmed as the series’ February spearheads.