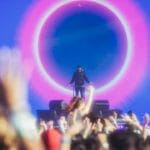 The Cure To Loneliness could’ve only been experienced live a handful of times in 2021. After headlining Porter Robinson’s first Secret Sky virtual festival more than a year prior, Jai Wolf was brought back for the real thing during Second Sky’s sophomore edition back in September, carefully selecting the Oakland Arena Grounds to be the landing spot for his debut album’s first live show of the year. For those that missed out on Second Sky’s day two stream or wanted to properly relive it—considering the unofficial YouTube uploads were out of sync—Jai Wolf decided to remaster his hour-long set in 4K quality and formally upload it.

Second Sky’s stream hadn’t entirely captured the audiovisual element of Jai Wolf’s album spectacle so he chose to rework the recording by weaving in and out between the sensationally designed visuals and actual footage of himself performing. Graciously sharing the 23-part tracklist along with the upload, Jai Wolf’s The Cure To Loneliness live show ignites with an unreleased original before leading into live album edits of “Telepathy” versus his “Blue” remix, his spin of ODESZA’s “Say My Name,” “This Song Reminds Me Of You” alongside his “Drivin’ Thru The Night” spin, “Moon Rider” with Wrabel, an in-person performance of “Lose My Mind” with Mr Gabriel, and an updated live finale of his iconic debut original, “Indian Summer.“

Tagged as jai wolf, The cure for Loneliness, Videos.

The Pope Was Spotted Visiting a Record Store in Rome

Diplo, Aluna reunite for effervescent house cut, ‘Forget About Me’