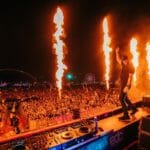 EDC Las Vegas had its fair share of memorable sets throughout all three days of its 25th anniversary, but one set that stood above most came from none other than Jason Ross. Just a few days prior to the delivery of “After You,” the Ophelia Records veteran took hold of the kineticFIELD soundsytem on day two for his return to the Las Vegas Motor Speedway, and he’s now allowing us to go back to the evening of October 23 with an upload of his complete set.

We didn’t miss a single opportunity to say it in the weeks since EDC Las Vegas, but Jason Ross’ genre-bending adventure in the desert was one of those rare performances that genuinely prevailed without a forgettable moment or low point. Opening with a spine-tingling edit of his Nevve pairing “Wild Ones,” Ross made every second of his kineticFIELD billing count, unexpectedly unloading Martin Garrix, Julian Jordan, and Tinie Tempah’s “Diamonds,” bringing out Seven Lions for the debut of “See You Again” with Fiora, reintroducing his forenamed original with Gryffin and Calle Lehmann, delivering Blanke’s unreleased rework of “Better Than Heaven,” combining his impending “Rebound” update for ARTY and Mat Zo with “Chains,” unleashing our track of the year frontrunner, and ultimately turning up the tempo during the set’s final minutes for an electric homestretch of hardstyle.

Relive Jason Ross’s EDC Las Vegas set below—with both the stream version on YouTube and lossless version on Apple Music—to see why it came away as one of our favorites from October.