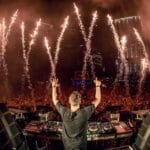 10 never-before-heard IDs in one set. That’s just an anomaly even by Ultra‘s standards, and we all know the Miami mainstay to be the birthing grounds for unfamiliar music. Martin Garrix hadn’t entirely inducted his new progressive-laden sound yet by the time that March 2016 crept up, but with “Now That I’ve Found You” alongside John Martin and Michel Zitron opening the doors to STMPD RCRDS just a handful of weeks prior, the newly inaugurated label head wanted to make his first opportunity to shut down the Miami main stage an immortal feat, one that would eventually find itself in the middle of our wistful sequence of Ultra’s greatest moments a half-decade later.

Martin Garrix’s unbelievable and exponential Ultra ascension follows as this: starting out as an ordinary attendee in the Bayfront Park crowd in 2013, Garrix immediately rose to a daytime mainstage slot at just 17 years old in 2014 to earning Ultra’s coveted Saturday sunset position in 2015, where he delivered his first originals-only set, to being promoted to top-line headliner pedigree in 2016, charged with Friday night closing duties. The progression in just four fleeting years was overtly inconceivable then, and it’s just as astounding reading it back right now.

It took more than two months of studio preparation, as well as the formation of a entirely novel live show from the ground up, all thanks to the gifted production team that Garrix specifically brought on for the occasion, commanded by none other than Gabe Fraboni. Everyone knew the moment that the “Lions In the Wild” opening struck that Garrix was about to do something special, and he did.

From minute one to minute 57, he pieced together a priceless tracklist that should be eternally framed, strolling through a never-to-be-released VIP version of “Rewind Repeat It” with Ed Sheeran, a bank of IDs that would eventually line up as his Seven EP, a surprise introduction into what would become AREA21, the revelation of “In The Name Of Love” with Bebe Rexha, and ultimately, the aforementioned STMPD RCRDS genesis as the performance’s firework-filled grand finale. If you’re still following along with this candidly over-the-top ovation to the height of Martin Garrix’s DJing timeline, you’re most likely in agreement with all of the above and we genuinely hope you enjoy rewatching this hour of uninterrupted Ultra 2016 bliss.

Dancing Astronaut celebrates the lead-up to what would have been Ultra Music Festival’s 2021 iteration with two weeks’ worth of Good Morning Mixes. Follow the series here.