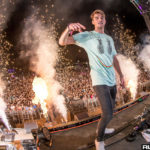 The year is 2016. At 10:00 p.m. EST on March 19, The Chainsmokers, hot off their Bouquet EP, stepped onto Ultra Music Festival‘s Worldwide stage. Before them: a thick crowd, thousands deep. Even years later, what ensued that evening at Bayfront can still be regarded as one of The Chainsmokers’ most pivotal live performances.

The Chainsmokers’ sophomore Ultra set, secondary to their 2014 UMF debut, further validated their footing in the electronic space, once again putting them on global display—and the world watched. While the foundational “#SELFIE” and “Kanye” days have since faded out of focus, supplanted by The Chainsmokers’ more recent offerings, including a career first–a film score for Words on Bathroom Walls–and a third studio album–World War Joy–the 2016 Ultra appearance has stayed gold, serving as a gilded reminder of how and why the production pair built its fanbase.

Rife with what can only now be considered timeless throwbacks, such as the inimitable “Roses,” “Split (Only U),” “Until You Were Gone,” and The Chainsmokers’ remix of Smallpools‘ “Dreaming,” the Ultra set asserts that the magic of live music is never lost, however many years later. Travel back in time below.

Dancing Astronaut celebrates the lead-up to what would have been Ultra Music Festival’s 2021 iteration with two week’s worth of Good Morning Mixes. Follow the series here.