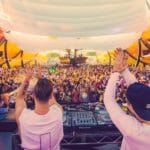 RÜFÜS DU SOL are taking you on a journey with the 11th installment in their “Rose Ave Radio” series that spans a blooming tracklist chock full of tracks from the likes of DJ Tennis, Fake Mood, Tim Engelhardt, Natascha Polké, Power Circle, and more. Following the Aussie outfit’s milestone 10th episode with Monolink in April comes a mystical, one-hour RÜFÜS DU SOL DJ set in tandem with a guest mix from Copenhagen-based experimental pop trio WhoMadeWho.

The band, which recently played an exclusive Cercle set from the temples of Abu Simbel in Egypt, concoct a charming blend of deep and melodic tunes for the second half of this month’s radio show. The nu-disco band hand-selected several secret weapons derived from their live sets, including Made In TLV’s remix of Trentemøller and Deltawerk’s “Kyte,” as well as tracks from Kris Davis, Adana Twins, Wahm, Time To Sleep, and more.

Listen to episode 11 of “Rose Ave Radio” below.