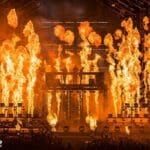 Let’s just preface this by saying that whatever has happened (or hasn’t happened) with Swedish House Mafia following Ultra 2018 is being considered completely irrelevant for the purposes of this article.

The Swedish House Mafia rumor mill never took a breather—which was in no secret fueled by Dancing Astronaut—in the wake of the One Last Tour grand finale. But when Steve Angello re-followed his Swedish counterparts on Instagram just two days after Ultra emblazoned a suggestive headline, “expect the unexpected,” across its December 2017 phase one reveal, the festival gave credence to the theory that Swedish House Mafia could actually be getting back together at Bayfront Park in March. Despite the numerous hints, allusions, and even the three white dots that flashed on the mainstage 48 hours earlier, the understanding that Axwell, Sebastian Ingrosso, and Steve Angello would stand side-by-side on the same stage they left behind five years prior didn’t genuinely set in until those names were read back in that same order, followed by an iconic “and you know that we are the Swedish House Mafia,” as everyone echoed each syllable of “Miami 2 Ibiza” in real-time.

The Swedes didn’t walk into Bayfront Park empty handed. Axwell notably asked the crowd to step into the club during the set’s halfway point to cede back-to-back IDs that were surprisingly uncharacteristic of anything the trio had been known for prior, but were still absolutely electric nonetheless, especially the “Don’t Call It A Comeback” ID. New music was just the bonus though, with Swedish House Mafia’s mashup package serving as the primary show stealer. Rife with mixtures of progressive royalty that paired “Payback” and “More Than You Know,” Steve Angello, Max Vangeli, and AN21’s “The Island” recast behind “Reload,” and “Don’t You Worry Child” and “Sweet Disposition,” the mashed-up material was accompanied by other tracklist slots spanning the remaining suspected classics.

Although it was nearly impossible for the triad’s reunion to come even remotely close to their 90-minute farewell performance, Swedish House Mafia turned an unlikely pipe dream into a nostalgic reality. They dispelled any future Dancing Astronaut tweets begging the three to reunite, and collectively directed the attention of the exhaustive dance music universe to the Bayfront Park main stage on this day, three years prior. We’re in no position to deem how Axwell’s “it’s Swedish House Mafia for life this time” message has aged until it’s truly all said and done, but regardless, something that we all can agree on was that nothing else mattered in those 60 indescribable minutes that finalized Ultra’s 20th anniversary.

Dancing Astronaut commemorates what would have been UMF’s 2021 installment with a two-week run of Ultra-themed Good Morning Mixes. Follow our road to Ultra here.