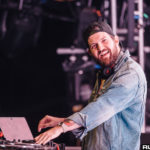 Shortly before the November 2019 dispersal of Dillon Francis‘ lauded Magic Is Real mixtape, the IDGAFOS figurehead would upload his Coachella 2019 set to YouTube, giving all streamers—even those not previously in attendance—something to buzz about. Over the past decade, the Los Angeles native has become a leading attraction of the Indio Valley affair, and with his festival debut able to be traced back to 2013, in the time leading up to the 2019 event, Francis was eyeing his milestone fourth Coachella appearance. As to be expected, it did not disappoint.

With Coachella sets from 2013, 2014, and 2017 in his back pocket, Francis stepped up to the decks to lace his animated primetime set with fan-favorite originals and remixes as well as some deeper cuts from his moombahton catalog. Halfway through the performance, Francis ushered lovelytheband onstage to perform their collaborative single, “Change Your Mind,” and later closed the set by inviting DJ Snake to join him for a rendition of “Get Low.”

Though the fate of Coachella’s 2021 iteration may be suspended in uncertainty at present, fortunately, Francis’ Coachella 2019 is available in its entirety below, and that’s exactly where we’re going this morning.