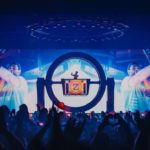 In an August 2019 interview, Zedd compared his then-upcoming ORBIT Tour to something near and dear to our hearts here at Dancing Astronaut: space. “We created all new visuals, tons of incredible clips; it’s just like going to space for an hour and a half,” he said of the show, soon-to-be-experienced.

Synonymous with the classically trained talent’s most meticulously crafted and intricate production yet, the ORBIT Tour would take Zedd through major cities in North America and Europe—and he’d electrify them all. After blasting off on September 13, 2019 in Seattle, Washington, the ORBIT Tour directed Zedd to San Francisco’s Bill Graham Civic Auditorium just one week later for a September 19 live stint that now serves as your Good Morning Mix.

For one hour and 36 minutes, everyone can be an astronaut, and blasting off is as simple as pressing “play” below. The full set, shot from various camera angles, captures it all: the jaw dropping visuals, the neon hues, the surging lasers, and Zedd, suspended at the center of a chameleonic orb that not only spins but also changes colors. It’s a marvel of modern production power from a producer who has steadily shaped the sonic landscape—even before the Clarity days.

London’s Printworks Featured in First Trailer for ‘The Batman’