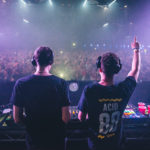 Gorgon City have teamed up once again with Chicago-based R&B and soul vocalists DRAMA for their long-awaited mesmeric house single, “You’ve Done Enough,” released via Astralwerks. The collaboration, which earned a deserving placement on Dancing Astronaut‘s record of the most-anticipated IDs of 2021, follows the UK duo’s REALM EP, released in December of 2020. “You’ve Done Enough” marks the duos’ second collaborative venture; their first came in the form of the refreshing hybrid house single, “Nobody,” delivered in April 2020.