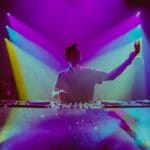 What just might have more viral potential than Squid Game, a Netflix original that racked up a rare 3.26 billion minutes of viewing in its first four weeks in the United States? Zedd‘s got the answer: a mashup of 23’s “Pink Soldiers,” popularized by the show, and ACRAZE‘s “Do It To It.”

After teasing the Twitterverse with the promise of a new intro pre-EDC Las Vegas, Zedd sent the Internet abuzz on October 24 with his cosmicMEADOW debut of the mashup, a seamless intermingling of two tracks from very different pop-cultural territories. The sonic collision has since emerged as one of the most-talked-about moments of EDC Las Vegas 2021, and chances are, this trend will continue, thanks to Zedd’s release of the mashup on SoundCloud and YouTube. The work, which marries two of the mainstream’s 2021 favorites, can be enjoyed in full below.

The post Green light: stream Zedd’s full-length ‘Squid Game,’ ‘Do It To It’ mashup appeared first on Dancing Astronaut.