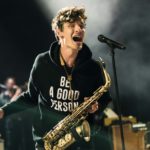 GRiZ has already gotten off to a busy start this year, gifting fans with three original tracks including “Vibe Check,” “Ease Your Mind” featuring Ganja White Night, and “Bring Me Back” with Elohim. Now, tacking on the fourth delivery of the year, the veteran sax-wielding producer delivers his latest, “Astro Funk;” a contender for the most aptly titled song in history.

Staying true to its name, “Astro Funk” takes fans on an out-of-this-world psychedelic excursion, enveloping the listener in GRiZ’s classic saxophone persuasion. Showcasing his endless well of creativity, the Michigan-native producer uses a flurry of layered synthwork, bass, and live instrumentation to launch fans on a wild ride into the stratosphere.

In addition to his consistent stream of releases, GRiZ also sold out the inaugural Space Camp, his largest headlining show to date, which features two nights of sets from the likes of CloZee, LSDream, Dancing Astronaut’s Breakout Artist of 2020, Moore Kismet, and more. Stream “Astro Funk” below.

The post GRiZ blasts off with fourth release of the year, ‘Astro Funk’ appeared first on Dancing Astronaut.