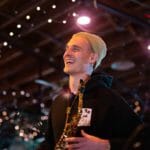 For nearly one full year, GRiZ and Ganja White Night teased their respective followings with a funk-ridden ID that, as of March 12, we know to be “Ease Your Mind.” As the idiom goes, good things come to those who wait and in this case, that “good thing” just happens to go by the name of “Ease Your Mind.”

The scintillating single—GRiZ and Ganja White Night’s first creative cooperative—wields walloping bass that’s slung in sync with GRiZ’s saxophone notes. After bringing a jazzy pizazz to streaming platforms on the sophomore “New Music Friday” of March, “Ease Your Mind” nestles in among GRiZ’s catalog of feel-good outputs and Ganja White Night’s collection of originals sure to get listeners off their seats.