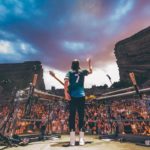 Gryffin‘s sole intention in the erasure of touring has been to set aside an unbounded count of high-class records that plainly warrant the right to be experienced in person, hopefully before the clock strikes 2022. While the deluxe Gravity repackaging still heavily resides in everyone’s daily circuit, Gryffin is now making his company formally known in 2021, aside from the “Safe With Me” acoustic, going from “Need Your Love” to “I Want Love” with the help of Two Feet for a one-way ticket into the new year.

The collaborative effort’s sudden disclosure had already skyrocketed any and all expectations, and Gryffin’s brief teaser had only guaranteed that he and Two Feet were qualified sonic equivalents. Arriving just ahead of Valentine’s Day, the aptly named “I Want Love” cleverly lines up Gryffin’s summer-like house craft with Two Feet’s composed, charming tone for a more than tempting holiday giveaway that has the longevity to parlay its way into the rounds well into the warm weather and beyond.