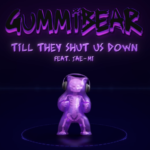 GUMMiBEAR is on a mission. The anonymous producer emerged late last year with a handful of remixes, taking on cuts from Michael Jackson and Justin Bieber as a formal introduction to the new project. Most recently, GUMMiBEAR took on Shannon’s Grammy Award-winning 1983 smash “Let The Music Play,” though that remix has barely had time to cool down before the burgeoning house force returns with another new setlist gem.

GUMMiBEAR’s latest catalog addition is an original work with vocal work from Jae-Mi called “Till They Shut Us Down.” A buoyant, bouncy house cut that sizzles with anticipation for the return to dancefloors hopefully later this year, GUMMiBEAR’s latest is a strong reflection of the producer’s worth, landing as one of his strongest outings to date. Hear “Till They Shut Us Down” below.

The post GUMMiBEAR delivers brand new original cut, ‘Till They Shut Us Down’ appeared first on Dancing Astronaut.

Tagged as GUMMiBEAR, house, music, till they shut us down.