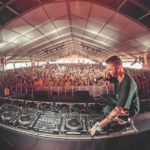 Habstrakt primes himself for another yearly round of bass takeover as he puts forth his first release of 2021. Recruited by young gun Nitepunk for a remix of his single “Flow,” the Frenchman takes on the former’s HARD Recs label debut with a sinister four-on-the-floor spin.

Previously crossing paths when Nitepunk appeared on Habstrakt’s remix package for “The One,” the two producers now trade favors again. Transforming the breaks-heavy production into a steady bass house endeavor, Habstrakt injects skittering hi-hats and dark bass line steps into his reimagined delivery, maneuvering the underground components of the predecessor into more club-heavy proceedings. Less raucous than the original, but equally hard-hitting, Habstrakt’s remix deals out a low-profile groove with massive impact.

Stream Habstrakt’s remix of “Flow” below.