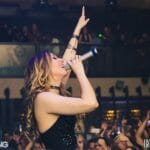 For five years—and counting—the electronic space has served as HALIENE‘s playground. In her aural flits from trance to melodic dubstep, a pen seemingly ever in hand, she’s scripted anthems to which crowds will infallibly responds for years to come, and—consciously or unconsciously—as she’s put lyrics to paper, she’s also arisen as an author of dance music history. HALIENE’s inextricability from the electronic craft, and vice versa, is already well exemplified in a decorated catalog that’s rife with collaborations to which the dance community at large would confer “classic” status. But, fortunately for us, it is further demonstrated in her fourth co-project of the calendar year, “Oceans & Galaxies” alongside none other than Jauz. The single directly succeeds Jauz’s February remix of Steve Angello and Laidback Luke‘s “Show Me Love.”

Impressing her soprano topline on Jauz’s piano-woven production, HALIENE gives voice to a single with a philanthropic and environmental focus. Though “Oceans & Galaxies” predates Earth Day, to be observed on April 22, the one-off is just the first piece in the partners’ plans to honor the holiday. On Earth Day, “Oceans & Galaxies” enthusiasts can tune in to Monstercat‘s Twitch channel to be treated to an acoustic rendition of the single, flanked by educational interviews on strategies for sustainability, a live art stream, and artist guests.

“Ocean & Galaxies’” environmental aim will also be bolstered by the release of limited-edition merch. A portion of the proceeds will be directed to Beneath The Waves, an ocean conservation foundation that the single’s distributor, Monstercat, will support via fundraising opportunities not only during the April 22 event, but also throughout the month of April.

Dancing Astronaut celebrates HALIENE as our April Supernova. Stream her latest output below, and stay tuned for her Supernovas feature and accompanying Instagram takeover, to debut later this month.