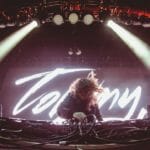 It’s an encore long called for in the two-year stretch that separated Trash and Guttridge’s prior collaboration, “Let Me Go” with i_o (2019), from “hiiigh.” And, as to be expected from a duo that does not disappoint, the production pair’s fourth-ever team up finds Trash and Guttridge cozied up in their shared wheelhouse, kickstarting hau5trap with four-on-the-floor basslines and a melody-driven methodology that’s turning heads in hau5trap’s direction. There they’ll assumedly stay, for as “hiiigh” renders clear, what’s about to come next is worth watching.