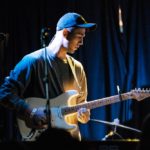 If it hasn’t been clear from the four times singles released to date—”Time,” “Feed The Fire,” “Impact,” and “Chemicals”—SG Lewis is auspiciously taking aim at the “Best Dance/Electronic Album” category at the 64th annual Grammy Awards, and “One More” only further suggests that it is not, in fact, too early to forecast his debut LP as a contender for a 2022 nomination. times has already landed on Dancing Astronaut‘s list of 17 of the most-anticipated albums of 2021, but, for now, we’ll let do the music do the rest of the talking.

Just 17 days shy of times‘ full-fledged descent on February 19, the vanguard is inviting Nile Rodgers to join the LP’s guest list, which, to date, has hosted Rhye, Lucky Daye, Robyn, and Channel Tres. Rodgers’ guitar chops take on a ’70s hue that evokes a flash of fringe under Lewis’ own vocals. In a November 2020 interview with Dancing Astronaut, the Dusk, Dark, Dawn producer dished that times would feature an unprecedented amount of his own vocal work:

“There was this kind of personal growth that I wanted to undergo in order for this album to be something that I felt incredibly proud of. I wanted to do things that I hadn’t done before and push myself outside of my comfort zone, so I ended up singing on over or about half the album. In the past, I’ve sang on like one or two tracks on projects. To have a large bulk of the vocals on the album be my own has been just really hugely rewarding and a huge challenge.”

Notably, “One More” is the second single in the times rollout to carry Lewis’ own vocals, following “Chemicals” in April of 2020. An alluring extension of the future disco sound that SG is stylizing through his own personality-radiating lens of late, “One More” soundtracks the countdown to times, and can be streamed below. Alternatively, Dancing Astronaut‘s interview with SG Lewis on times can be found here.