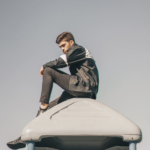 Solely auditing the stretch of time since “Worlds,” the irrefutable standout piece from Sable Valley’s first-ever label compilation, Heimanu has continued to broaden his NuRave identity and validate his standing as one of the scene’s most promising talents. Following assistance on both Juelz’s remix pack as well as ARMNHMR’s A Thousand Dreams EP to wrap up a banner year, the Aussie producer is formally turning his release page to 2021 as he treks through UK-based label Liquid Ritual for “Mira.”

A welcomed chance of pace, comparative to Heimanu’s tried-and-true hard-hitting recipe, “Mira” strikes an astronomical jackpot of celestial sentiment, calling in the fan-branded Hardwave end-of-the-production line for Heimanu’s first bonafide win of the new year. The Sydney native dove into the mindset behind his style alteration on the single and how he sought out to provide a sense of solace amid the pandemic, stating,

“I wanted to make something with a bit more emotional depth and perspective to it. A song that grabs at the heart and doesn’t let go, which is very different from my normal Wave sound. A song probably best enjoyed while the skies are grey with sleeting rain, or as you drive at night through a sleeping city. Or both. More importantly, I hope this song helps you cope with hopelessness, loss or grief. It certainly helped me.”

Stream Heimanu’s “Mira” in its entirety below.