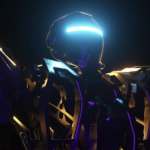 After admitting Fairlane, Jonathan Mendelsohn, Luca Lush, Vari, and Synymata, to name just a few, SLANDER‘s melodic bass label Heaven Sent is enlisting anonymous producer helloworld and dance music staple Pauline Herr for its sixth release. The platform’s latest single “Voices” is helloworld’s debut, and what a debut it is, with Herr describing the release as one of her “favorite songs” that she’s “been a part of.”

“Voices” is a refreshing take on Heaven Sent’s melodic bass sound and stays true to the up-and-coming label’s “emotional music sent from above” mantra. And, if “Voices” is any indication of what’s to come from the cryptic artist, then the excitement surrounding not only helloworld but also Herr should be at an all-time high, particularly as the latter continues her ascent into the hearts of dance music fans—a move that’s been in motion since she made her own debut in 2017.

Listen to “Voices” by helloworld and Pauline Herr below.

The post helloworld, Pauline Herr take us to heaven with ‘Voices’ appeared first on Dancing Astronaut.