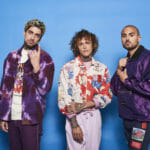 After cultivating a cheeky, frequently dance-pop-facing catalog in past years, it very well could be said that Cheat Codes‘ debut LP HELLRAISERS, Pt. 1 was a project years in the making, as the outfit increasingly learned the characteristics of their own sound following the “Pretty Girl” remix that put them on the map in 2017. So, Dancing Astronaut will say just that; HELLRAISERS, Pt. 1 is a long-form that emerges as the mature sum of KEVI (Kevin Ford/prince$$ rosie), Trevor Dahl, and Matthew Russell‘s experiences at the helm of dance-pop convergence, even though the making of the 11 songs that the album spans were not in progress since 2017.

With an A-list array of guest cameos calling forth Tinashe, Marc E. Bassy, Bryce Vine, CXLOE, AJ Mitchell, Au/Ra, and Lil Xxel, HELLRAISERS, Pt. 1 is largely localized within the sometimes barefaced but always fresh pop-toeing terrain in which Cheat Codes have so often staked their flag. A sing-a-long-friendly collection of catchy hooks, beats well-suited to windows-down drives, and synergistic features, HELLRAISERS, Pt. 1 offers listeners an unprecedentedly extended look at one of Cheat Codes enduring strengths: their ability to capture and immortalize the feeling of what it is to be young—in all of its conflicting emotions, exhilaration, uncertainty, nostalgia, and reflection-laced glory—in musical form.

As the “Pt. 1” in the LP’s title indicates, though Cheat Codes took their time to reach the debut album benchmark in the context of their career, it’s far from their last. HELLRAISERS, Pt. 1 appeals to the dance-pop palates that KEVI, Dahl, and Russell have so consistently whet and satiated since dance music’s decade past, but the second and third installments in the HELLRAISERS series will be largely influenced by KEVI’s hip-hop inclinations and Russell’s dance penchants, respectively. A satiating soundtrack to the summer evenings now nearly upon us, streamers can be expected to come back like boomerangs to the trio’s long-awaited LP. Hear it below.

The post ‘HELLRAISERS, Pt. 1’ is Cheat Codes as we know and love them—lively conductors of dance-pop crossovers appeared first on Dancing Astronaut.