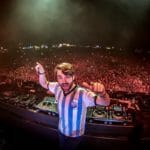 In fortuitous news for HI-LO fans, “HADES” emerges as the first inclusion of a two-piece EP that HI-LO will issue later in March. At present, the outstanding piece of that puzzle is a collaboration with Will Clarke, “Check.” On his T78 matchup, however, HI-LO dispenses a relentless barrage of acid synths, emphatic kick drums, and bouncy basslines in a cacophony that would command any underground club space.