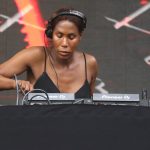 Featuring the impassioned vocal styling of Cor.Ece, the track incorporates Dijon’s innate penchant for letting a track build and then flourish. The venerated house producer speaks on the track stating, “It’s a metaphor that there is still so much work to be done around the world to ensure that all black- and brown-skin people are free, and not just in the US,.” She continues,

“Slavery may have been abolished in one form, but we are still living in a country where the police have replaced plantation owners and our lives are still not valued in a place that was built on the bodies and souls of Black people.”

All month long Apple Music will celebrate the immense influence Black culture continues to have in the world, specifically in music, with “Black Music Month 2021,” a collection of playlists, DJ mixes, original content, and more. Listen to Honey Dijon’s powerful Juneteenth anthem, “Unleash” below.