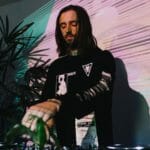 Anyone who has listened to a Gryffin set recently might have noticed a little extra spice on his hit single, “Best Is Yet To Come” with Kyle Reynolds. Many suspected that the electro-pop song got a facelift in remix form, but nobody knew who was responsible for placing a spin on the original. Cue if found, who took the original to new heights with his high-octane remix, which is decidedly heavier than the original thanks to two massive drops that defy any one genre. if found took to Instagram to share his thoughts on the take, writing

“I pushed myself to develop a sound that is recognizable across different styles of EDM and this remix is a taste of some of that diversity I’m striving to include in my ‘if found’ project.”

if found is fresh off his Electric Daisy Carnival Las Vegas debut and if that and his latest official remix are any indication, he’ll be one to watch moving forward. Listen to if found’s remix of Gryffin’s “Best Is Yet To Come” with Kyle Reynolds below.

The post if found brings the energy on high-octane remix of Gryffin’s ‘Best Is Yet To Come’ appeared first on Dancing Astronaut.