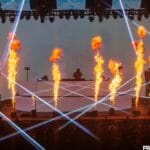 Dancing Astronaut‘s 2021 Artist of the Year didn’t waste time announcing his next event. Hot off the heels of his three-day destination festival Ember Shores, comes the news that ILLENIUM will take over Washington’s famed Gorge Amphitheatre from May 28 – 29, with “more details [to follow] in the new year.”

ILLENIUM, whose most recent studio album, Fallen Embers, was nominated for a Grammy, is no stranger to takeovers situated at massive venues. In 2021 alone, ILLENIUM took his one-night, four-set “TRILOGY” event to Las Vegas’ Allegiant Stadium and played three nights at Red Rocks Amphitheater.