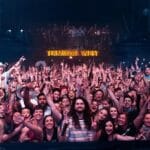 On February 23, Insomniac unveiled Lost In Dreams, a new label that will not only translate to an in-person festival, but also “open up a new world of future bass, melodic dubstep, and vocal-driven dance music.” Just three days later, Insomniac is prying open this “new world” with Lost In Dreams’ inaugural original.

After rapidly rising up the bass ranks in recent years with fan favorites such as “First Breath,” which notably soundtracked a 2020 Starbucks commercial, Kaivon can now add Lost In Dreams history-maker to his growing list of sonic distinctions. On the label’s installing tune “Whole Life,” Kaivon taps into the high-voltage future bass and melodic trap intermixture that has consistently turned heads in his direction. A Nevve-supplied topline amplifies the arresting power of “Whole Life,” marking Lost In Dreams’ impactful start.