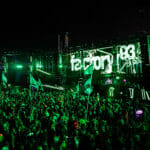 Factory 93, Insomniac‘s very own ode to the underground, is set to make its European debut, bringing their tried and true techno productions to Antwerp’s Waagnatie expo center on November 26 and 27.

Factory 93 has set itself apart from the pack with its trendsetting lineups and inspiring productions, and the eminent brand’s European debut is expected to be no different. Kicking off the powerhouse weekend will be a showcase event featuring none other than Adam Beyer and his cohort of Drumcode talent, including but not limited to Bart Skills, Layton Giordani, and Len Faki. The party doesn’t stop there, however, as the following night invites the prolific productions of Boris Brejcha, who’s been building towards his next LP, as well as the surging sounds of his Fcking Serious squad.

Although Factory 93’s lineups are worth the cost of admission on their own, those who have had the pleasure of attending one of Insomniac’s events will attest that they’re much more than the talent that’s billed. With a distinct focus on cultivating harmony between unrelenting beats, cutting-edge tech, and most importantly, self-expression, Factory 93’s European debut is one not to miss.

The post Insomniac’s Factory 93 to make European debut with back to back Belgian events appeared first on Dancing Astronaut.