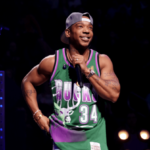 Ja Rule has sold an original one-of-one oil painting of the Fyre Festival logo for $122,000 via NFT.

In an interview with TMZ, Ja Rule indicated that his sale of the artwork was a part of his process of moving on from the infamous Fyre Festival that he co-founded alongside Billy McFarland four years prior. The New York rapper stated,

“When I first had it made, I was energized—I had embarked on a new business. But then it became a symbol of what could have been. For me, it’s done and over with.”

Ja Rule was previously cleared in the $100 million lawsuit, which eventually led to a six-year federal prison sentence for entrepreneur-turned-fraudster Billy McFarland.

The 48-inch-by-60-inch oil painting, created by Tripp Derek Barnes, was sold to an anonymous buyer, and is a part of Ja Rule’s early efforts to help launch the NFT exchange company Flipkick. A handwritten note in the auction lot reads “f*** this painting.”

This is not the first time that items from the Fyre Festival disaster have been sold to the public. In August 2020, US Marshals auctioned off 126 items, including hats, t-shirts, sweatpants, and hoodies, in order to provide aid for victims of the Fyre Festival fraud.