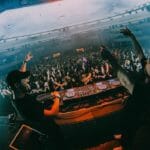 Within the first few seconds of “One More Day’s” play during Seven Lions‘ momentous evening at The Gorge Amphitheatre, the thousands watching at home, us included, were well aware that it had “track of the year” potential. The seed for Jason Ross, Blanke, and Chandler Leighton‘s merger was actually planted just before COVID-19 latched itself onto everyone’s daily conversation, with the two production heads debuting an early variation at Los Angeles’ Hollywood Palladium. Fast forward to just over a year later, and “One More Day” has found a permanent home on Ophelia Records.

Take a lone walkthrough and any clarification as to why “One More Day” captured a berth to Dancing Astronaut‘s most sought-after productions of 2021 would be wholly unnecessary. The cooperative plays up to the firepower of each of its three constituents, with Ross and Blanke fluently meshing their two respective tones of choice melodic dubstep and high-voltage bass, with the latter taking the reigns on its sophomore zenith for an essential hard-hitting changeup. It goes without saying, but Leighton deserves her own upfront acknowledgement, with the songstress’s vocals being the outright deciding factor that enables the guaranteed future classic to crane to an entirely different stratosphere of melodic supremacy. Sure, it might only be March, but its ripened arrival only reaffirms that “One More Day” is debatably the sole track for succeeding singles to unseat moving forward.