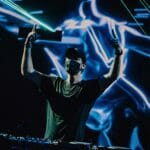 Jason Ross has a compelling case to concurrently hold the first, second, and third spots of Ophelia Records‘ list of paramount originals over the past half-year. After shutting the label’s 2020 doors alongside Dancing Astronaut‘s Supernovas inductee RUNN and then turning in one of Dancing Astronaut‘s most-anticipated IDs—”One More Day” with Blanke and Chandler Leighton—Ross achieves trifecta status in the wake of his “The Atlas” series wrap-up, partnering with singer-songwriter collective Nevve to re-enter the Seven Lions-directed base with “Wild Ones.”

“Wild Ones” is the sophomore branch of Ross’ May-slotted EP on Ophelia Records, following in the footsteps of his Blanke and Chandler Leighton link-up, issued in March, and if the EP’s initial two pieces are even the slightest bit of an indication, Ross has an unanswerable masterpiece looming. Tying together his patented sleight of melodic dubstep and the eternally top-shelf vocals of the Nevve constituent—classified singer-songwriter group for those uninformed—”Wild Ones” calls for a standing ovation after a three-and-a-half-minute duet between two of dance music’s most gifted. Although a definitive date and name have yet to be publicly assigned to the EP, the countdown to sometime in May cannot come soon enough following both singles and Crystal Skies‘ confirmation of an appearance on its eventual tracklist.