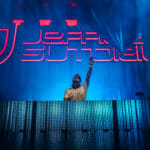 It’s time for a new chapter of Jeffrey Sutorius.

After being legally required to surrender the Dash Berlin name and all of its coinciding trademarks at the end of March, Sutorius is forging forth under his biological name. For two of his concluding originals under the Berlin moniker, Sutorius had ended a seven-year gap between Revealed Recordings appearances with “Skies” and “Firefly,” and that intermission won’t be accumulating anywhere near as long again as he returns to Hardwell’s label once more on “Nostalgia” with the help of Krimsonn.

Sutorius had previously stepped away from the Berlin name once before on “Bad Days” with Jake Reese, and for his first formal delivery within his next era, Revealed Recordings couldn’t have been a more ideal home. Although the name on the title looks a little different, Sutorius’s high-level output hasn’t stumbled in the slightest. “Nostalgia” is exactly as its headline suggests, with Sutorius whipping through nearly four minutes of vintage progressive house beside Krimsonn, who sets up “one of his favorite top-lines” that he’s ever done, to back at more optimistic pre-pandemic times.

The post Jeffrey Sutorius strides into solo era with ‘Nostalgia’ alongside Krimsonn on Revealed Recordings appeared first on Dancing Astronaut.