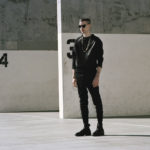 From Jimmy Edgar‘s forthcoming CHEETAH BEND LP comes “Notice,” an experimental crossover that positions the Detroit native alongside 24hrs for the very first time. A representation of opposites of the musical spectrum, “Notice” infuses techno influence with lo-fi/trap rhythms for an after-hours single that employs Edgar’s savvy ghetto-tech and glitchy compositions. Of his approach to CHEETAH BEND at large Edgar states,

“The value I bring is hybridization. I think about different universes of sound coming together to create an entirely new domain of knowing.”

Edgar and 24hours have proven a celebrated taste and consistent fixture within each other’s sonic range; the rapper has collaborated with the likes of RL Grime, Flosstradamus, and Benzi, while the “REAL TRUTH” producer has previously worked with Vince Staples and OG Maco, most recently enlisting Matt Ox and Danny Brown for his forthcoming LP.

Edgar’s CHEETAH BEND is slated to release on February 26 via Innovative Leisure and features collaborations with Hudson Mohawke, SOPHIE, and more.

Listen to “NOTICE” below.