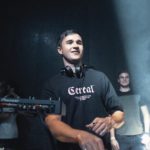 John Summit continues to bring validation to his Dancing Astronaut’s Artists to Watch in 2021 title, positioning himself early in the year for success as he lands an official remix for Gorgon City‘s “You’ve Done Enough” featuring DRAMA. The Chicago-bred house producer struts his forward-thinking talents on Gorgon City and DRAMA’s joint sophomore single, turning the original down-tempo tune into an all-out tech house jam.

Summit gained extensive popularity in June 2020 with his track “Deep End,” which became the longest-running Beatport #1 of the year and went on to garner a remix from duo SIDEPIECE as well as a wide range of support from some of the world’s biggest DJs. Amongst those who have recognized him include UK duo Gorgon City, who performed a back-to-back set with Summit at a rooftop in the former’s hometown of Chicago in November 2020. The meeting between the two dance forces has led to Summit’s present remix contribution to Gorgon City and DRAMA’s track, named as one of Dancing Astronaut‘s most-anticipated IDs of 2021.

Further paving the way for the next generation of musical talent within the house genre, Summit instates a dancefloor staple for the ages with his “You’ve Done Enough” remix, maneuvering a course of groovy flows and energetic movements that speak to his masterful reconstruction capabilities.