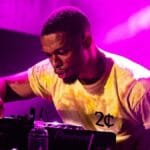 capshun and Jon Casey—profiled in Dancing Astronaut’s 5 Under 15K, a feature that spotlights rising acts with 15K or fewer Soundcloud or Spotify followers—are a veritable “Fever Dream” on Jadū Dala. The tie-up brings the heat with a slow and syncopated chant that fluidly evolves into an assembly of building kicks. Packaged with crowd-pleasing bass, “Fever Dream” is available to stream below.

Having taken to RL Grime’s Sable Valley imprint earlier this year alongside one of Dancing Astronaut’s Artists to Watch in 2021, Cozway, Casey hasn’t taken his foot off the gas since he sparked onto the scene in 2017. And, with “Fever Dream” landing on three Spotify playlists including Hype, Trap Mojito, and Friday Cratediggers, not to mention Casey now rounding out 50K monthly Spotify listeners, it’s clear that his immovability in the electronic context is in fact no “Fever Dream.”