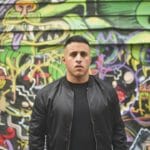 With the crisp shuffle of the “Worry ‘Bout” beat, Jon Suarez continues to stretch his legs as a solo act, countering his calendar-opening one-off, “Disco Lights,” with his Darklight Recordings debut. His first output as a signee to Fedde Le Grand‘s label, “Worry ‘Bout” sees Suarez adopt a slightly more industrial style than that of “Disco Lights,” which formally ushered in a new year of Suarez originals via Robbie Rivera’s Juicy imprint on February 5. Dressed in the staticky technics customary to an underground output, “Worry ‘Bout” slaps a Malaa-esque vocal sample atop agile instrumentation accented by drum kicks and anchored by a club-directed bassline.

Arriving as Suarez’s first major label signing, “Worry ‘Bout” is a testament to his potential as a solitary artist. Though Suarez initially attracted attention for his involvement in the two-piece Strive & Vader tech house outfit, in 2020, he set out to underscore his electronic acumen on a solo scale, dispensing his first EP as an independent artist, Rhythm & Beats.