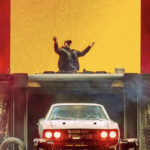 It all began on the top of a Jeep as part of Room Service’s virtual festival. Unseating that performance was a tall order, but JOYRYDE decided to not only bring the car venue back, but to take it to a higher level for a stream along Insomniac‘s Electric Mile on February 12. The socially distanced drive-thru audiovisual experience has been running since New Year’s Day from Santa Anita Park just outside Los Angeles, featuring seven inimitable worlds that represent a handful of Insomniac’s most reputable festival titles.

Just a month removed from back-to-back Park ‘N Rave appearances as part of Insomniac’s running drive-in series at the NOS Events Center, JOYRYDE rigged a complete DJ booth to the sunroof of a moving car as he explored the Electric Mile experience while throwing down one white-hot house record after the next. The stream toured the Electric Mile for nearly 90 minutes, parading Insomniac’s vibrant luminaries and theatrics as JOYRYDE soundtracked the journey from a one-of-a-kind background.